The Importance of Focus Rooms in Hybrid Work

The Importance of Focus Rooms in Hybrid Work

Focus room popularity was on the rise in pre-covid times before video conferencing became the universal norm. However, we are now faced with the same problems that focus rooms stood to solve pre-pandemic, but the implementation of hybrid working has added a new layer of complexity to this solution; and doubled, if not tripled its importance. To understand the nuances of the focus room solution today, it is important to first look at the evolution of workspace optimization.

According to Wainhouse Research, “small rooms account for the largest percentage of conference rooms in the workplace and will see the highest increase in unit count over the foreseeable future. We expect ultra-small rooms for one or two people (also known as focus rooms, touchdown rooms, or telephone booth rooms) to account for most of this growth as they are an ideal workplace solution for the growing acceptance of hybrid work.”

Evolution of the Workspace

The traditional corporate cubicle was designed in the 1960s as a solution to the original open workspace plan that was commonplace in the early 1900s. Some characteristics of this office style were:

The original open workspace concept predates the era of cubicles, but in recent years, it has made a highly contested return. Pre-pandemic, “hip” tech companies seemed to be moving to open workspaces in mass as a way to disrupt the perceived “stuffiness” of closed workspaces. Characteristics of open workspaces in the late 2010s were:

So, hip or not, it has become clear focus rooms became a crucial part of open workspace success. Companies that can provide an adequate amount of focus spaces are able to reap the benefits of both workspace styles. 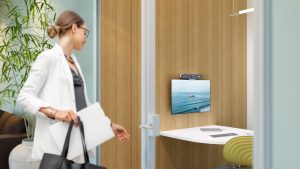 The reality is that there is no “right” way to work. Some are most successful working without the office altogether, some from the open office, some from a private workspace, and some feel that they can optimize their productivity with the option to do all. This has led to the birth of “hybrid work”. While the definition of “hybrid-work” varies from organization to organization, there are some common characteristics.

Taking this into consideration, the need for a focus room has never been greater. Focus rooms provide a space for employees to take private video calls, and as we all know, the amount of video calls in our workdays has risen significantly.

Successful, long-term implementation of hybrid work also requires that companies strive to achieve meeting equality. Unequal experiences of remote and in-office employees played a huge role in why many companies (and employees too) felt that they could not fully commit to remote work pre-pandemic until they didn’t have a choice. It seems that if we are not able to give equal experiences to remote and in-office employees under hybrid work models, we will continue to see the same friction with remote work that we saw pre-pandemic.

Poly is focused on building solutions to help hybrid companies achieve meeting equality, which is why we have created plug-and-play focus room devices like the Studio P15, with advanced AI that places the focus on the speaker so that everyone, including remote meeting attendees, has a clear view of what is going on.

With the quickly changing workspace landscape, all signs point to the need for personal workspace rooms. It is the focus room’s time to shine.