The global pandemic has been a catalyst for digital acceleration across all industries, as companies have been forced to rapidly deploy new technologies and implement new processes to maintain operations in virtual environments. State and Federal governments faced a massive challenge in rolling out voice and video solutions to enable remote judicial proceedings due to the scale of their operations, the need to integrate with complex legacy infrastructure, and laws designed to ensure that defendants receive transparent and public trials.

Because privacy and security are paramount within the court system, historically, it has been uncommon to handle cases virtually. Therefore, video simply hadn’t been adopted at the same rapid rate found in private industries. In fact, prior to the Coronavirus Aid, Relief, and Economic Security Act (CARES Act) ordered on March 29th, 2020 videoconferencing was only permissible in select circumstances within the judicial system. The CARES Act “…temporarily approved the use of video and teleconferencing for certain criminal proceedings and access via teleconferencing for civil proceedings during the COVID-19 national emergency”[i] in federal courthouses and courtrooms.

To learn more about the evolving role of voice and video technology in judicial settings, Poly spoke with Bob Kelley, Sr. Video Applications Engineer for the Supreme Court of Virginia. Kelley’s department is responsible for providing primarily technical support, planning, enhancements, advisory functions, and capabilities for videoconferencing for the court system in the state of Virginia.

Starting in 1998, the Virginia judicial system procured a grant for 12 Poly (then Polycom) video units to test how videoconferencing could work in a justice setting. The technology needed to provide robust, consistent audio and video to facilitate virtual judicial functions in safe and secure locations for instances in which in-person hearings or meetings were not possible. When asked why Kelley chose Poly all those years ago, he explained that the decision was based on their ability to support open architecture, ensure ease of deployment, device reliability, remote device management capabilities, consistent user interfaces (UI) across devices and workspaces, and interoperability with different video platforms.

In addition to meeting all of their technical specifications, Kelley underlined that “it was [Poly’s] willingness to work with us to help customize the product to our needs at the time that no other vendor would do. That let us know we had found a partner we could count on. This was a great decision that we have never regretted thanks to the consistency of the product and service.”

Once the original pilot program was proven successful, the Virginia State legislature decided that its Supreme Court should lead the way in using video technology. As the network of video endpoints gradually began to spread throughout the different courts and associated agencies, Kelley needed to establish a way for all the endpoints deployed to be able to connect to the court’s central systems. Additionally, some devices were not part of the court’s network that needed to be ‘tied in’ to the court’s system. Therefore, the state judicial system established a network infrastructure that includes components of Poly RealPresence Clariti with two RMX bridges, two Distributed Media Applications or ‘DMAs’ and Access Director to handle border proxy and outside the network duties.

ALL SYSTEMS IN PLACE

Fast-forward to present day, Virginia’s statewide deployment includes over 800 endpoints – primarily Poly Group Series, 310, 500, and 700. Devices are located in all corners of the justice system, including courthouses, jails, magistrate offices, hospitals, juvenile detention homes, one in a concert venue, and another used for entertainment functions on a mobile device. All video endpoints create the ability for courts, law enforcement, corrections, and hospitals to all be able to communicate easily.

OPEN ARCHITECTURE & EASE OF USE

The fact that Poly’s open architecture “plays” nice with all devices gives the court the ability to tie in with the public and attorneys when they can’t be physically present in the courtroom. “We’d always had the ability to bring in witnesses from remote locations for cases […] But when COVID hit, what we found was we need to have something a little bit easier for us to utilize. So, thanks to the tie-in with Poly and Webex, we’ve been able to do Webex for public [hearings]… Our court of appeals is utilizing [Microsoft] Teams for writ panel hearings, we’re utilizing Web Suite and the bridge for all the Supreme Court hearings… Because we already had everything in place, the impact on us was pretty low as far as infrastructure goes,” said Kelley.

Kelley stated that without the videoconferencing network that they already had in place, the onset of COVID-19 would have incited ‘chaos’. Explaining, when you find yourself in a desperate position, you lose your ability to plan and find yourself ‘grasping at straws’ to patch together systems just to keep things moving. Thorough planning is required for identifying technology that is appropriate for use in judicial settings as security and privacy are especially important. Kelley recommends that if states haven’t already begun, they should start planning their video infrastructure immediately so that they can establish something that will work for them in the long run – the next five to seven years.

ACCESS TO JUSTICE: THE JUDICIAL SYSTEM’S ADOPTION OF VIDEO

As of late October 2020, the state of Virginia was already 125,000 video hearings ahead of where they were at the same time last year. Meaning, Kelley’s department has needed to order more video units to accommodate social distancing – sometimes hundreds more per month. Talk about Digital Acceleration!

The court system’s use of professional-grade technology has been the conduit enabling the courts to stay on track as individuals are now allowed to “come in” via video to handle minor offenses. Additionally, they are creating ways to meet with individuals who are isolating to prevent exposure to the virus. An example of this is that some jails have utilized the Poly RealPresence mobile function with iOS, bringing an iPad to a prisoner’s jail cell to allow them to have their day in court despite exposure to the virus. This mitigates potential exposure to the virus while keeping the courts from getting backed up with cases and fewer people awaiting their court date from jail.

When asked what feedback they have received about the expansion of their video program, Kelley reported, “Large corporation hospitals are grabbing onto this technology to increase their access to justice.” Explaining that because many people who are admitted to the hospital come in for medical and mental health concerns, there is a judicial process involved in these instances. The ease of access to justice that video brings is something that “…has been really important to them. Enough for them to make investments in it, which we hadn’t seen in the past,” he continued. 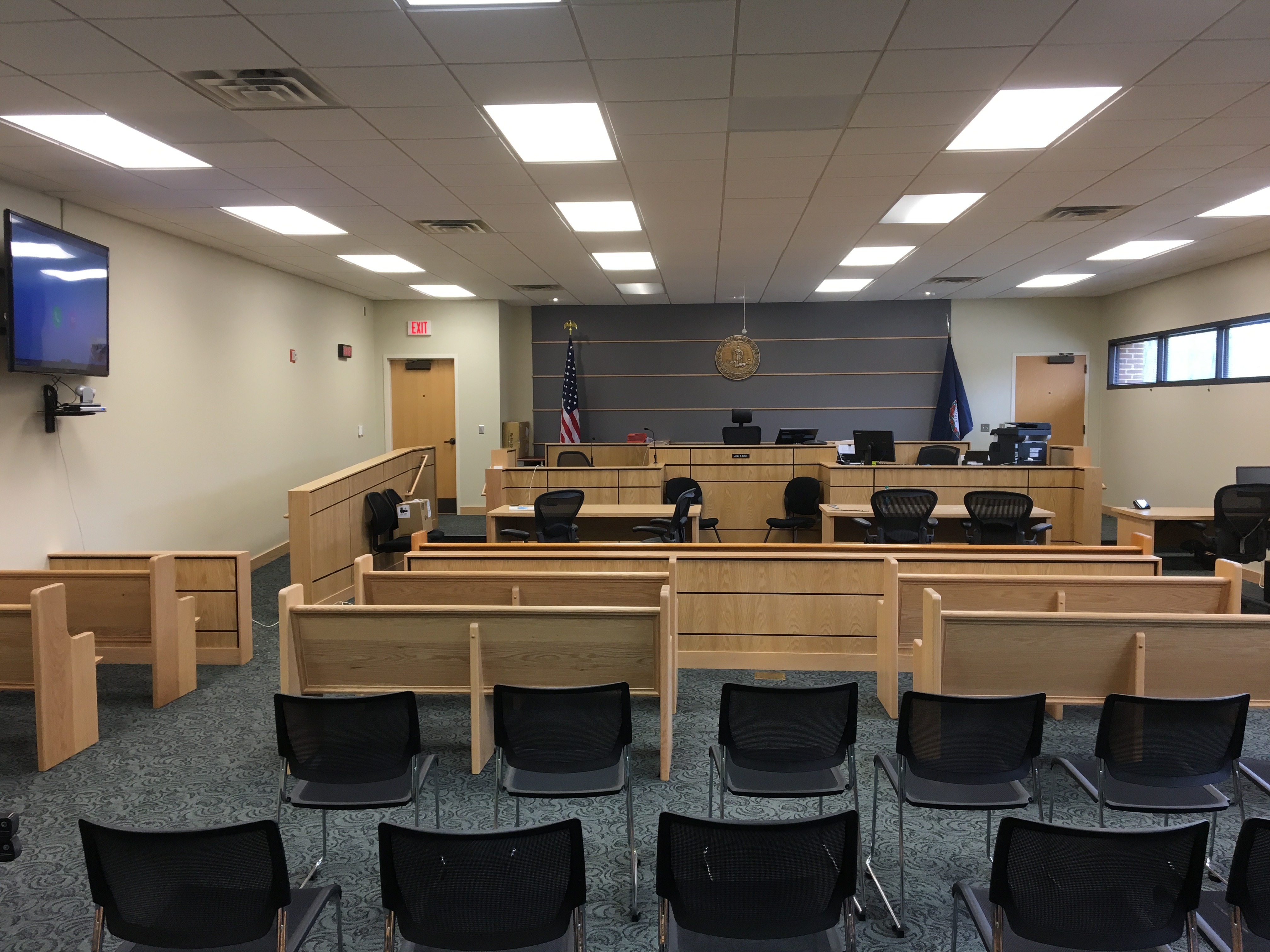 As for law enforcement, Kelley quickly stated, “I think that everybody sees the advantage to it.” Explaining, when they have videoconferencing easily accessible, officers can save a significant amount of time that would have been dedicated to traveling between different locations such as the magistrate, judges, courthouses, and jails – this speeds things up significantly. Additionally, by using video, jails don’t have to send multiple cars and deputies for long-distance transports because of the severity of the person they are transporting. This results in increased safety and savings because anytime officers aren’t on the road, they can do their other work.

In addition to the protection of public health and safety that video makes possible, Kelley noted that the state has also been able to significantly decrease spending on judicial processes. “What we’ve found with videoconferencing is, the fact that we can save the state a tremendous amount of money in travel costs as well as the intangible amount of public safety that you have from not having to transport prisoners out of secure areas.”

Kelley referred to an interaction he had with a Sheriff about what value the use of video had been to him. The Sheriff reported that he went from 1,100 prisoner transports a year to 100 and that the savings from that alone have been immense. “So, you look at that and there’s a value. And, it’s a value that you can’t put prices on by breaking the numbers down very easily. But you can tell that you’re saving a huge amount of money on transportation costs, manpower, and hours. So, the return on investment is huge” Kelley explained.

WILL THESE CHANGES LAST?

With so much change within a small period of time, it’s interesting to ponder what is next for tech in the court system. Kelley predicts that as we move into a post-COVID future, some things will go back to the way they were, but the pandemic will ultimately cause a permanent change across the board. As far as the state’s court systems go, Kelley expects to stay on the same track they are on. Noting that as technology changes, so do people’s expectations and he anticipates that there will also be a transformation in people’s thought process that allows change to take place. He believes that people will grab onto the tech we are using today and maybe even expanded upon it to ultimately make everyone’s lives easier in the future.

Poly @PolyCompany
10 minutes ago
DEMO: Available on the #PolyStudio X30 and #PolyStudio X50, presenter mode is a dynamic speaker tracking mode that frames the main speaker as they move and talk. #HybridWorking

Poly @PolyCompany
2 hours ago
It's time to raise the bar for video conferencing. With the #PolyStudio USB, see and hear everyone clearly and converse naturally. #HybridWorking