At Poly, being an ally means supporting authentic self-expression and fostering inclusion year-round, but June is a special time to celebrate Pride. The jubilant festivities worldwide commemorate LGTBQIA+ visibility as a community and personal celebration of self-worth and dignity. It is also a time to remember how such joyful celebrations came to be. This year, we’d like to kick off Pride month by encouraging everyone to learn more about its origins and the iterations of the Pride flag, which is a crucial symbol steeped in meaning and history. 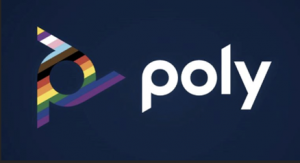 The following June, the Gay Liberation Front organized marches in New York, Los Angeles and San Francisco to protest the rampant, wide-spread injustices against the LGTBQIA+ community. Over time and with change, the marches evolved into what we know today as Pride parades and festivals, which take place every year in June to honor the Stonewall Uprising, nationally and internationally.

Nine years after the LGTBQIA+ community rallied at the Stonewall Inn, Gilbert Baker designed the community’s first universal Pride symbol: the flag. Although it isn’t Baker’s initial iteration, we have the rainbow flag we are most familiar with today because of him. Each of the six colors symbolizes an important value, but collectively, they represent the community’s diversity and unity. 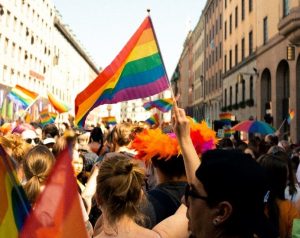 Although the rainbow flag is the most common, there are other variations in use today. Philadelphia’s eight-stripe LGTBQIA+ Pride flag, for example, includes black and brown stripes to symbolize the community’s support and inclusion of queer people of color. This variation may be surprising because all LGTBQIA+ people are represented in the traditional rainbow flag. However, people of color have been and continue to be marginalized. Recent movements, like Black Lives Matter, brought the world’s attention to this with a renewed perspective. Philadelphia officially adopted the eight-stripe version of the flag in June 2017 to help draw attention to marginalized people of color within the LGTBQIA+ community as part of the More Color, More Pride campaign. 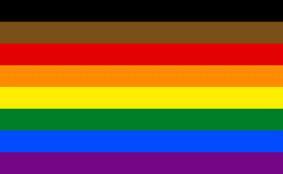 Many communities under the LGBTQIA+ umbrella have begun creating their own flags to further represent queer identities. The transgender flag is an early example. It was created by Monica Helms, an American trans woman, in 1999. This flag is used throughout the world to represent the transgender community and individuals, their pride, diversity and rights.

More recently, Morgan Carpenter, bioethicist, intersex activist and researcher, created the first intersex flag in July 2013. This flag helps the community unite under a symbol devoid of gender stereotypes. Yellow has long been seen as an intersex color, representing those who do not fit the gender binary, while the purple circle represents the wholeness of the intersex community. The unbroken circle is an especially important symbol because it represents the completeness of intersex people from the moment of their birth, and this community continues their fight for bodily autonomy to this day.

Baker’s rainbow design has been altered and reimagined many times over the years to better represent the LGBTQIA+ people it stands for. Every iteration helps people find more authentic representation, belonging and unification, which is so important for a historically oppressed community.

The Pride Employee Resource Group (ERG) at Poly works throughout the year to foster an inclusive work environment where everyone feels empowered to be their authentic selves, embracing and accepting every gender identity and sexual orientation. Thanks to their work, Poly continues to learn, grow and fundraise to support Pride. This year’s funds will go toward Rainbow Railroad, a global not-for-profit organization that helps LGTBQIA+ people facing persecution based on their sexual orientation, gender identity and sex characteristics.

Although rights, acceptance and representation have improved since the Stonewall Uprising, the LGTBQIA+ community still faces marginalization and consistent injustices today. Click here to learn how you can take action and make a difference.

Learn more 👉 https://t.co/YBhkBgodEn https://t.co/VMMV4PSTqH
View on Twitter
1
3
Poly · 13 hours ago
@PolyCompany
Discover what @Frost_Sullivan says about the importance of #MeetingEquality in the hybrid workplace. #HybridWorking

Download the white paper now 👉 https://t.co/btN9AXyMv2 https://t.co/5GbqkyFIAg
View on Twitter
0
2
Poly · 14 hours ago
@PolyCompany
We're more powerful when we work as one. Empower #MeetingEquality with #PolySolutions for #HybridWorking. #AllTogether