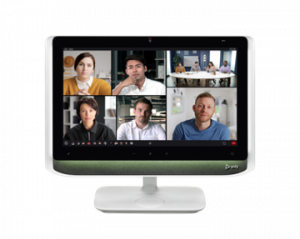 Picture this: you are headed back into the office to connect with your teammates in person, but many of your teammates were unable to join you. You check into a conference room with a few in-person colleagues to join a call with your entire hybrid team. You speak up to contribute to the conversation, but your remote teammates can hardly tell who is talking with the typical fish-eye group view of your conference room, making them feel isolated and causing frustration for those in the room.

On the other side of the call, your remote colleagues have a hard time identifying who is in the room and because they don’t know whose name to call, they avoid prompting the conference room participants to join in the conversation.

Whatever side you end up on, it’s not an ideal experience. 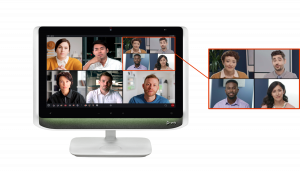 As part of our ongoing mission to bring equality to everyone who joins a meeting, Poly is proud to announce our latest Poly DirectorAI smart camera technology: people framing mode. By creating zoomed-in tiles for every individual in the room, people framing mode solves these hybrid meeting challenges by making sure that everyone has a seat at the virtual table.

What is People Framing Mode?

As the newest framing mode within Poly DirectorAI’s suite of features, people framing sits alongside other modes including group framing and speaker framing, providing Poly users with another layer of flexibility to customize meetings to their preferences.

People framing is similar to our flagship framing modes in some ways and unique in others. Like other framing modes on Poly devices, people framing places the focus on certain elements of the meeting—in this case, all participants. After identifying participants, the camera combines several different zoomed-in shots of the room to create a unique layout of frames, showing all in-person participants with an up-close view. This layout of frames is then sent to the video app of your choice as a single video stream so that far-end viewers can easily connect with in-person participants.

And it’s as easy as that! The magic happens in the camera, which means that you can use people framing mode with any app that your Poly video device works with. This flexible deployment makes achieving meeting equality much more accessible, no matter what your preferred platform is.

Take Your Meetings Up a Notch 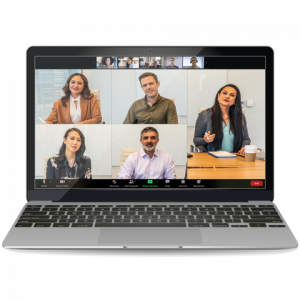 Poly DirectorAI’s people framing mode is our next step towards the future of hybrid meetings. It’s a stride toward a world where remote and in-person employees feel that they have equal chances to speak, to be seen, and to succeed. And it’s another element that will go into creating hybrid meetings that are exciting, productive and feel like the new normal.

For more information on Poly DirectorAI’s newest framing mode reach out to the Poly team today or visit Poly.com!

Learn more 👉 https://t.co/YBhkBgodEn https://t.co/VMMV4PSTqH
View on Twitter
1
3
Poly · 13 hours ago
@PolyCompany
Discover what @Frost_Sullivan says about the importance of #MeetingEquality in the hybrid workplace. #HybridWorking

Download the white paper now 👉 https://t.co/btN9AXyMv2 https://t.co/5GbqkyFIAg
View on Twitter
0
2
Poly · 14 hours ago
@PolyCompany
We're more powerful when we work as one. Empower #MeetingEquality with #PolySolutions for #HybridWorking. #AllTogether