A group of about 30 Plantronics women associates attended the LeadOn Conference in Santa Clara, CA, on Tuesday, February 24, 2015.  There were over 5,000 attendees and 100 speakers at this inaugural event sponsored by Watermark, a non-profit organization which helps executive women connect with one another, develop their careers and advocate for women in the workforce.  Plantronics is a corporate sponsor of Watermark.  The lead speakers included Hillary Clinton, Diane von Furstenberg and Dr. Brene Brown, as well as many other fantastic speakers. 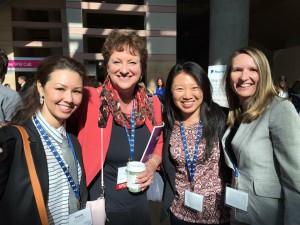 What made this event so unique, as my colleagues and I discussed later, is that the event was so diverse and broad, so elemental in the engagement of the speakers and the audience and so provocative in its meaning.  The event drew 5000 people from all ages and backgrounds, who wanted to hear inspirational speakers, focus on work-life balance skills, consider leadership approaches and think about individual breakthrough moments. 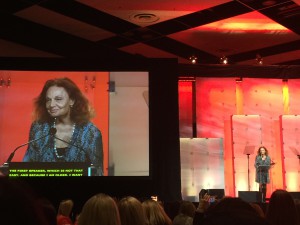 Starting off with Diane von Furstenberg who told the audience that it isn’t easy to be the first speaker in such an accomplished room, to a panel of hard-hitting women including Jill Abramson formerly of the NY Times, Roz Hudnell of Intel and Jessica Hudnell of Intel, to Candy Chang, creator of the “Before I Die Project.” 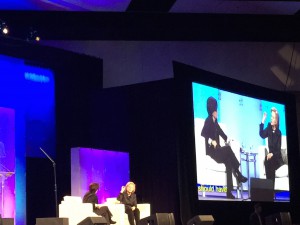 Hillary Clinton keynoted after lunch, with an awesome and amazingly direct interview with Kara Swisher, following up on an authentic, “wholehearted” talk by Dr. Brene Brown.  Hillary spoke of empowering women and creating an environment where women can be supported in child care and other work life issues that make the work life so hard to manage.  She also talked about the wage inequity and the imbalance of genders in the workplace in Silicon Valley.

There were so many exceptional breakouts with insightful speakers that covered the gamut of body language, negotiating, courageous innovation, how to get a board seat, building meaningful connections, and so many more wonderful topics!

The showcase finished out the event, with a booth where Ericsson graciously paid for 500 backpacks to be stuffed for local school children, and including a board for attendees to write, finishing the sentence, Before I Die, I want to….

The day was a catalyzing event for virtually all the attendees, including the Plantronics attendees.   We were all so grateful that Plantronics supported this event and allowed a group of 30 women to attend to be inspired and changed by this experience.