Butler Hospitality Simplifies & Unlocks the Power of Video with Poly

Butler Hospitality Simplifies & Unlocks the Power of Video with Poly

The next time you’re in a hotel and order a meal from their restaurant or room service, it may not actually be coming from the hotel.  A new firm called Butler Hospitality is helping hotels meet their guests’ dining needs in four US cities so far – and they’re growing.

Serving more than forty-thousand hotel rooms In New York, Chicago, Miami and Washington D.C. – and soon to be serving over two-hundred thousand rooms in US cities coast-to coast – Butler’s ability to communicate with their staff, investors, customers and potential customers has never been more important.  They wanted to find a videoconferencing solution that would be reliable and provide them with a sense of pride as they collaborated with others in their industry.

The first system they installed was not from Poly.  It was a multi-component endpoint with a robotic camera, controller, and processor.  It seemed to work OK for them during initial tests, but they soon found that it locked them into only one video platform provider.  Aaron Cohen, Butler’s Chief Revenue Officer, explained that “If we’re courting a new investor, and that investor uses Zoom, we don’t ask that investor ‘do you mind using our platform instead?’  You’ve got to be able to join that Zoom call.”  Having made a big investment in video equipment that turned out to be incompatible with other video platforms was a big headache for the Butler team.

In an attempt to find a solution, Butler purchased one of the many Poly endpoints that is platform agnostic and put it in one of their other conference rooms.  (It was actually less expensive than their initial investment.)  Aaron explained that the results were very impressive.  The Poly video bar was able to follow the action in the room and always perfectly frame the shot without any distracting camera motors or other moving parts buzzing around.  Poly’s innovations in noise elimination and low-light camera pick-up created experiences that were, in his words, “as good or better than” the more expensive system in every aspect. 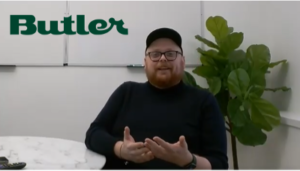 In Aaron’s words, he would “absolutely recommend the Poly systems to anyone who wants a high-quality system that doesn’t want to get locked-in to just one video platform provider.”  In his mind, his current usage of video platforms involves “a little mix of everything.” He has “no idea” what the prevailing video platform will be next year, as he says, “it may not even have been invented yet.”  Aaron is very confident however that the Poly systems are his best choice to ensure the value of his firm’s investment into the future.

To find out more about the many Poly systems that can give your team the same confidence to just crush your meetings, visit our website, or reach out to your Poly representative and tell them you want the less expensive, better quality, video platform agnostic endpoints that are helping Butler grow their business every day.